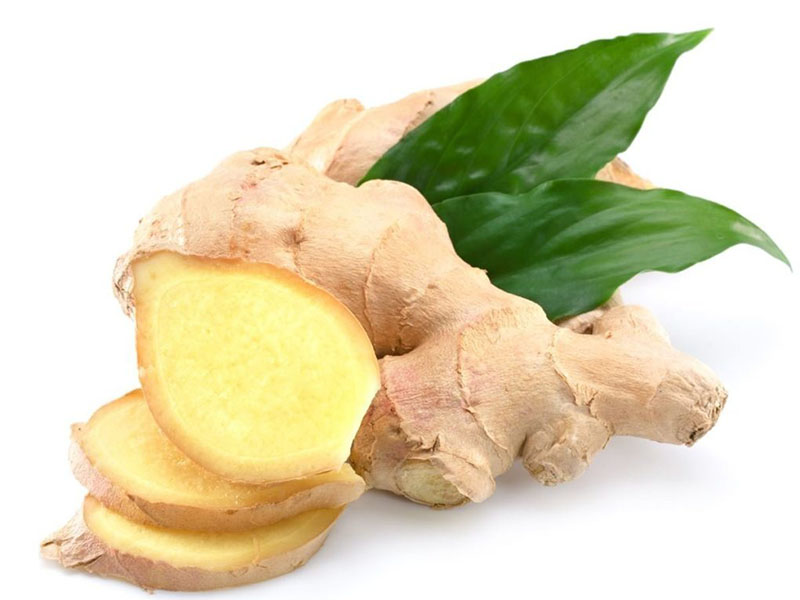 The origin of ginger is the tropical region of Asia and the type of ginger that grows in India has the most genetic variation. This plant was exported to Europe from India during the first century AD and its application was recognized as cooking in the thirteenth century. China and India were the first countries that used the medicinal properties of ginger. Sanskrit texts refer to the medicinal properties of this plant and in China it used to treat indigestion, diarrhea and nausea, as well as treat arthritis, colitis and heart disease. Medieval pharmacists offered ginger to relieve nausea and bloating.

It has been shown that ginger has antioxidant properties. Gingerols is a kind of antioxidant in ginger that protects HL cell lines (which are used as a norm for the evaluation of harmful ingredients in cells) against oxidative stress. Ginger oil has a protective effect against DNA injury caused by H2O2.

In vitro studies on laboratory animals have shown that ginger has a protective effect on the stomach. Researchers in an experiment published in World Journal of Gastroenterology, investigated the effect of ginger on gastric motility and stomach emptying in patients with indigestion and it has been shown that ginger increases stomach emptying and contraction of the antrum (the end of the stomach) in these patients. Some scientists have described the mechanism of this effect as unknown and others find it responsible for the effect of ginger on serotonin (a substance released by the nervous system that plays a role in regulation gastric motility).

Vitro (in vitro) studies have shown that gingerols and shogaol at high doses promote heart strengthening. Gingerols and shogaol are biosynthesis enzymatic inhibitors of prostaglandins (are the chemical mediators that trigger inflammation pathway thromboxane (play a role in vasoconstriction and blood clotting) and leukotriene (a combination that is released in response to inflammation).

Based on a research published in Journal of Dental and Medical science, ginger could reduce systolic and diastolic blood pressure and heart beat rate in women and men. It has been suggested that the role of ginger in reducing blood pressure applying by blocking calcium channels dependent voltage.

A research published in journal of medical sciences of Mazandaran university has shown ginger plays a role in improvement depression caused by diabetes in laboratory mice. Different neurotransmitters as norepinephrine and serotonin play a role in depression and reducing the density of synopsis of these substances leads to symptoms of depression. Studies have shown hormonal and neurochemical changes caused by diabetes can play a role in depression. In conditions of induced diabetes with streptozotocin in mice, density of serotonin, norepinephrine and GABA (nervous mediators) were unbalanced in different parts of brain especially in middle ventricular part of hypothalamus and methanolic extract of ginger could with releasing of serotonin, norepinephrine and GABA balance synopsis density of these neurotransmitters.

Probably the methanolic extract of ginger applies its anti-depression effect in diabetic mice by enhancing GABA function. The confirmation of this hypothesis requires more testing.

The results of a study have shown that alcoholic extract of ginger has anti-inflammation and pain killer effects. Different researches have shown that in cellular level the extract of plant is able to modulate immune responses of intensifying inflammation. It has been determined that most of the case studies such as reducing fat or sugar and in particular the anticancer activities of this plant are also carried out through the mechanisms for modulating inflammatory processes. Active ingredients of this plant as gingerols, shogaol and curcumin have the ability to inhibit the prostaglandins, nitric acid and even involved interleukins (a type of cytokine that is made up of white cells) in inflammation. In addition, ingredients in ginger inhibit the producer enzymes of these inflammatory mediators.

The results of a research published in journal of Evidence-Based Complementary and Alternative Medicine have shown the positive effect of ginger extract on cognitive function of healthy women of elderly. In this study, ginger improved attention and efficiency of the cognitive process in these individuals. This can be attributed to the effect of ginger on increasing the amount of norepinephrine, epinephrine, dopamine and serotonin (neurotransmitters) in cortex and hippocampus.

In a research published in Tikrit Medical Journal the effect of ginger on sexual function of infertile men was investigated. Based on this research, consumption of ginger increased number and movement of sperms and improved their life and morphology, and also increased level of testosterone and glutathione serum (anti oxidative ingredients). The researchers have attributed the reason for this to protective effect of antioxidant of ginger and its effect on glutathione and decreasing oxidative stress. Gingerols and shogaols are important phenolic ingredients in ginger that have antioxidant property.

The clinical experiments on human have shown the effect of ginger in prevention of nausea caused by travel, surgery and pregnancy period. Based on some clinical researches consumption of 1g of ginger at one hour before surgery has reduced nausea and vomiting at the first 24 hours after surgery. Many mechanisms have been recommended for antiemetic effect of ginger; for example an animal model has shown that ingredient of gingerols-6 increases transferring materials into the digestive system. Also, these ingredients and the other ingredients of ginger had anti hydroxytryptamine-5 (anti serotonin) activity in Indian guinea pigs.

Ginger is rich in gingerols and shagaols that among them gingerol-6 and shagaol-6 are powerful inhibitors of lipoxygenase-5. Ginger has ability for inhibition of synthesis of some inflammatory cytokines as interleukin-1 and tumor necrosis factor of alpha (TNF-α) and can inhibit responses derived from activity of Th1 (a type of white cell that plays a role in immune system). However, it can inhibit immune responses caused by Th2 that has an important role in creation of asthma disease.

Some reports say that consumption of ginger can reduce the pain of arthrosis. A research has shown that consumption of 250 mg of ginger extract for 3 months reduces the pain of knee arthrosis. Inhibition of synthesis of prostaglandin and leukotriene (inflammatory mediators) are suggested mechanisms for the effect of pain killer and anti-inflammatory of ginger. In some studies ginger has been compared with drugs such as ibuprofen. In another study effect of glucosamine and ginger powder has been compared in clinical improvement of patients with osteoarthritis knee and it has indicated that consumption of ginger powder can be related to decreasing pain of knee joints. Studies on animal models have shown inhibition effect of ginger on enzymes of COX-2 (cyclooxygenase) and lipoxygenase. In another research, it has been observed that consumption of raw ginger with 3g dose in a day at least for 3 months can reduce pain and swelling of the joints in patients with joint diseases. Researchers say that anti-inflammatory ingredients of ginger can cause inhibition of inflammatory prostaglandins.

Consumption of 1g of ginger three times a day for 45 days reduced amount of triglyceride and cholesterol level in people with high cholesterol level. In an experiment that its results were published in journal of Pharmaceutical Science, consumption of ginger powder reduced the level of serum triglyceride in patients with type-2 diabetes. Effect of ginger on reducing blood lipids can be due to a decrease in fat absorption (for example with decrease lipase pancreas) and an increase in the conversion of cholesterol level to bile acids. It has been reported that ginger also can prevent cellular biosynthesis of cholesterol by reducing enzyme of farnesyl diphosphate of liver synthase (play a role in producing coenzyme Q10 that is an antioxidant that prevents peroxidation of membrane lipids).

In many cases ginger is used to improve symptoms of irritable bowel syndrome but there are not many experiments to prove its effect on IBS. In an experiment that its results were published in journal of Complementary Therapies in Medicine ginger reduced symptoms of the IBS in suffering patients. It has indicated that this effect depends on dose and it is not clear that its effect is anti-inflammation of ginger or other properties of this plant.

A research has shown that the effect of ginger powder on treatment of migraine was comparable with sumatriptan (a drug of anti-migraine), while the side effects were lesser than this drug. The another experiment has reported that the pain of migraine in a 42 years old woman with 16 years migraine history after consumption of ginger supplement in her diet (1.5 to 2 g of ginger in a day) had a significant relief.

In a research that its results have been published in Journal of Alternative and Complementary Medicine the effect of ginger was compared with mefenamic acid and ibuprofen in reducing the pain of monthly cycle (primary dysmenorrhea) of women. Primary dysmenorrhea was created due to hyper-production of prostaglandins of endometrial texture (inner womb). These results showed that these 2 drugs and ginger have the same effect on reducing this type of pain. According to researchers, the mechanism of this ginger effect can be changes in prostaglandin system. Ginger prevents production of prostaglandins by inhibition of cyclooxygenase and lipoxygenase metabolism.

Based on the findings of a research that has been published in Cancer Prevention Research journal, ginger can effect on the improvement colon cancer. This test was performed on intestinal mucosa of healthy volunteers and showed that ginger can reduce the level of eicosanoids (biological messengers that contribute to immunity and inflammation) and probably they do this act with inhibition of arachidonic acid changes in these materials. Increasing inflammatory eicosanoids produced by cox is one of the first things that happen in the development of colorectal cancer. Ginger reduced COX in vitro condition and decreased the production or amplification of Adenoma (benign tumor with the origin of the glandular tissue) in rats. The mechanism of the effect of ginger in anti-cancer activity is not well known, but it seems to be related to antioxidant and anti-inflammatory activity of ginger ingredients (gingerols and shogaols). Created apoptosis cellular death caused by gingerol, pareidolia and shogaol has been shown in cancer cellular categories of human and Syrian mice.