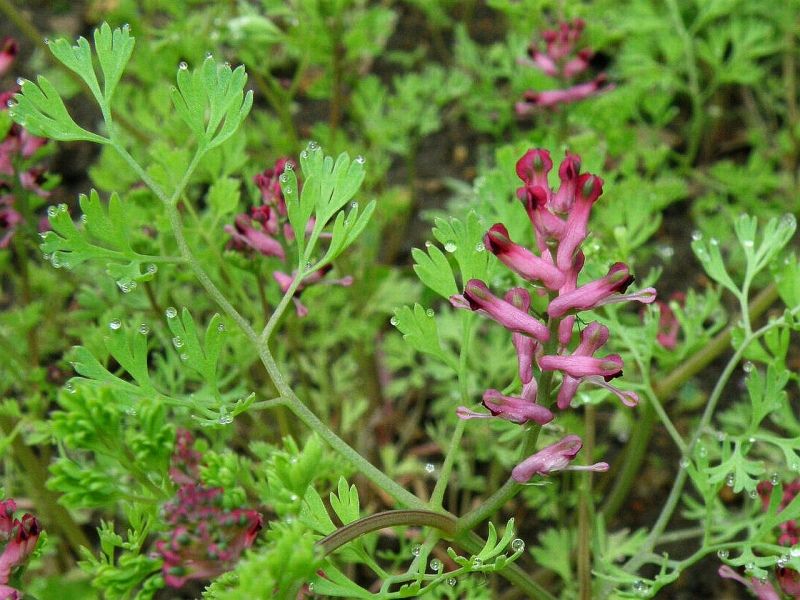 Fumitory is a perennial and herbaceous plant from Fumariaceae family and its height is 30-70 cm. Fumitory`s origin is Morocco and the Iberian Peninsula. The dispersal of fumitory is in Asia and Africa. This plant is distributed in large parts of India to a height of 2438 meters in Himalayas, Baluchistan, Afghanistan, Iran and Mongolia. In Arabic it is named Sahtaraj and in India is Pitpapra or Shahtrah.

Hypoglycemia effects (blood glucose reducer) of methanolic extract of fumitory in doses of 125 and 250 mg/kg, daily for one week on normal and diabetic with strepotozocin rats in 2013 were investigated and its results were published in Advanced Pharmaceutical Bulletin. Consumption of methanolic extract of fumitory just on diabetic rats with strepotozocin and at density below 100 (mg/dl) had a potential for reducing glucose level. There was no significant difference in blood glucose levels between diabetic rats at doses of 125 and 250 mg/kg. In another experiment, the effect of oral use of fumitory at dose of 25.6% for 5 weeks after diabetes induction with strepotozocin was investigated and serum levels parameters and triglyceride, total cholesterol level, HDL cholesterol level and LDL, before diabetes induction, 3and 6 weeks after treatment with fumitory were measured. After 3 and 6 weeks there wasn’t any significant difference at glucose levels of treated rats with fumitory in comparison to diabetic rats that were not under treatment with fumitory. But triglyceride levels were reduced in undertreated group with fumitory. In undertreated group with fumitory at the sixth week total serum cholesterol level was reduced and HDL cholesterol level was increased significantly. The results of this study were published in Journal of Basic and Clinical Pathophysiology in 2014.

In 2013 the study with the aim of anti-inflammatory diagnosis of fumitory due to presence of ingredients of Fumaric Acid, flavonoid and phenolic for skin diseases and relieve itching and eczema was done and its results were published at Jentashapir Journal of Health research. Anti-inflammatory effect of Hydroalcoholic extract of fumitory in rats at the doses of 200, 400, 600, 800 or 1000 (mg/kg) with the use of carrageenan (in order to create inflammation) was investigated. Doses of 200 and 400 (mg/kg) of fumitory extract had less effect on edema of paw area in comparison to control group (aspirin receptor at the dose of 300 mg/kg). However, the doses of 600, 800 and 1000 mg/kg of fumitory extract have shown more anti-inflammatory effects and statistically the differences between these groups were not significant.

In 2004 the pain killer effects of methanol extract of fumitory in mice were investigated and its results were published in Daru journal. So the analgesic effects of extracts obtained by percolation and soxhlet methods in mice exposed to acute heat (using the hot-plate method) and continuous chemical pain stimulant (using formaldehyde) were evaluated. Intraperitoneal injection of extract of fumitory percolated (extracts prepared by percolation method) at the dose of 100 mg/kg in the second phase of the formalin test showed significant analgesic effects. The most analgesic effect was induced at the dose of 300 mg/kg which was significant in both phases of formalin test. The results have shown that only the percolated extract of fumitory had significant effect on pain caused by hot-plate method.

In 2012, the effects of fumitory on intestine movement disorders in animal samples were investigated and its results were published in BMC Complementary and Alternative Medicine. Diagnosis of its laxative effect inside alive body in mice was done. These effects on straight muscles contraction with the use of separated intestinal samples (ilium and genome) from various animal species (mice, guinea pigs and rabbit) were investigated. Methanol-aqueous extract of fumitory at the doses of 30 and 100 mg/kg showed laxative activity in mice body. In study on intestinal tissue of living things, fumitory extract in density dependent method (density of 0.1-1 mg/ml), showed atropine-sensitive stimulatory effects on ilium and genome of mice, rabbit genome and ilium of guinea pigs. Methanol- aqueous extract of fumitory contained Alkaloids, Saponins, Tannins and Anthraquinone. Although based on laboratory studies fumitory extract and its fractions have contractile and anti-contractile effects due to the presence of cholinergic and the calcium channel blocker ingredients which may be an explanation for the traditional use of fumitory to treat constipation and diarrhea.

In traditional medicine of Iran fumitory is traditionally used because of features of boosting fertility.in 2013, a study was done with the goal of considering the effect of fumitory leaves extract on reproduction parameters in mature male rats of Wistar race and its results were published in International Journal of Reproductive Bio Medicine. In this empirical study, healthy male rats treated with fumitory leaves extract at the densities of 100, 200 and 400 (mg/kg) through gavage for 70 days. Blood samples were collected to detect serum levels of testosterone, LH and FSH. The weight of reproductive organs and morphological stimulation level (morphological characteristics) and amount of density of epididymal sperm in each experimental group were examined. Doses of 200 and 400 (daily, mg/kg) hadn’t any effect on weight of body samples while weight of testicles and epididymal significantly increased.  Significant changes were not observed in weight of seminal vesicles and abdominal prostate among tested groups. In rats treated with extract, the amount of density of epididymal sperm and the percentage of normal sperms morphologically increased significantly. Serum testosterone level in rats that recieved doses of 200 and 400 (daily, mg/kg) significantly increased. The results of this study emphasize on potential of ethanol extract of fumitory leaves on improving reproductive parameters and its increasing.

In 2008, a study was done with the goal of detection of liver protecting potential of ethanol-aqueous extract 50% from all parts of fumitory plant and three fractions of hexane, chloroform and its butanol against the liver toxicity caused by d- galactose amine in rats and its results were published in journal of Phytomedicine. Liver protection was evaluated in cases of reduction in histological damage, changes in serum enzymes (SGOT, SGPT, ALP) and reduction in metabolites of bilirubin and glutathione (GSH) and lipid peroxidation. Among the fractions more than 90% of protection was observed by butanol fraction with the highest protein alkaloid content about 2mg/g. Separated protein in doses of 10-20 (mg p. o.) had the same hepatic protection effect with standard drug named Silymarin (single unit dose of 25 mg orally). Also, it was reported that fumitory had a good hepatic protection activity against liver toxicity caused by anti-infection drug of tuberculosis. Brewed form of fumitory aerial parts is used to treat jaundice.

Using different behavioral models, ethanol extract (50% volumetric) of fumitory in doses of 100,200 and 400 (mg/kg) to detect neuropharmacology activity (investigating the effect of drugs and chemicals on the brain), antidepressant activity and overall effects on central nervous system were studied. The results showed that the fumitory in the dose-dependent manner increased sleep time caused by consumption of sleeping pills of Pentobarbital and reduced falling sleep time in the rat significantly. Fumitory did not show the effect of relaxing muscles and antidepressant activity in rodents. The results of this study were published in journal of E J Pharmacol Therapy in 2010.

Fumitory has antibacterial activity against six species of bacterial pathogens belonging to Enterobacteriaceae family.  Based on results, Klebsiella Pneumonia is the most sensitive bacteria and Salmonella typhimurium and Escherichia are the most resistant bacteria against antibacterial effect of fumitory extract.

In 2011, a study was performed with the goal of considering chemical protecting effect of fumitory against cancer cells of liver with N- nitrosodiethylamine and carbon tetrachloride in Wistar rats and its results were published in Asian Pacific Journal of Tropical Biomedicine. During the study, fumitory extract has been given orally to experimental samples in the doses of 200 and 400 (mg/kg) once a day. At the end of the twentieth week, body weight, liver weight, liver relative weight and percentage of liver cancer markers such as levels of liver enzymes and total bilirubin levels were measured. Fumitory suppressed tumor burden (the number of cancer cells, tumor size or progression of cancer in the body) and the return of activity of liver cancer marker enzymes have shown protective effects against harmful chemical factors.

The medicinal specie of fumitory has bile removal property. The alkaloid in fumitory not only increases the bile secretion but also increases the bile to reduce its secretion in the case of pathological. Isoquinoline Alkaloids contribute to the antispasmodic effects of the plant on the gallbladder, bile ducts (and digestive system. Cinnamic acid content in fumitory has biliary effect. Based on another study, fumitory extract inhibited the accumulation of bile stones in mice.

In 2011, a study with the goal of considering the effect of fumitory alcoholic extract on hand eczema was done and its results were published in Iranian Red Crescent Medical Journal. In a random study 44 patients with hand eczema randomly used cream contains 4% fumitory or cream without effective ingredients twice a day for 4 weeks. Reducing eczema area had significant difference between two groups before and 2 weeks after treatment. Only one patient showed side effects associated with the use of fumitory cream as Erythema. Thus we can use fumitory extract as an effective factor to treat chronic hand eczema.

The mucus gel sticking to the mucosal surface of the stomach protects the lower epithelium against acid, pepsin and necrosis factors such as ethanol and indomethacin. The cellular protection created by the aqueous extract of fumitory may be due to interactions with the mucus layer attached to the stomach. Therefore, the aqueous extract of fumitory reduces secretion of stomach acid, acidity and creating wound. The effects of anti-Helicobacter pylori and protective of aqueous extract of fumitory in stomach pylorus that ligation and wound caused by indomethacin and toxic ingredient were evaluated. The result showed that this plant had significant inhibitory effect on stomach injury at the doses of 100, 200 and 300 mg/kg of body weight in different models of wound induction.

Ethanol extract of fumitory 50% for possible effects of moderating cognitive function in albumin mature rats was evaluated. Fumitory showed a dose-dependent reduction in the activity of Acetyl cholinesterase of brain, increased muscarinic receptors densities   as well as some of the beneficial effects on the antioxidant state of the brain. Also, it had useful nootropic-like effects on cognitive functions.

Traditionally fumitory had properties of anti-indigestion, blood purifier, menstrual flow secant, diuretic and sedative. It is also used to treat cramps of the abdominal muscles, diarrhea, fever, blood disorders and tuberculosis infection. Shoot and leaf brewed fumitory uses as doping (tonic), anti-parasite and laxative and also used in cases such as syphilis, leprosy, constipation and jaundice. Leaf pulp of fumitory is used as an ointment to treat headache.  The brewed form of this plant is used to treat goiter. In Greek medicine fumitory is an important ingredient in many blood-purifying ingredients such as the combination of “blood purifier potion”. It is used in India to treat fever and flu, liver problems and bacterial infection of the skin.