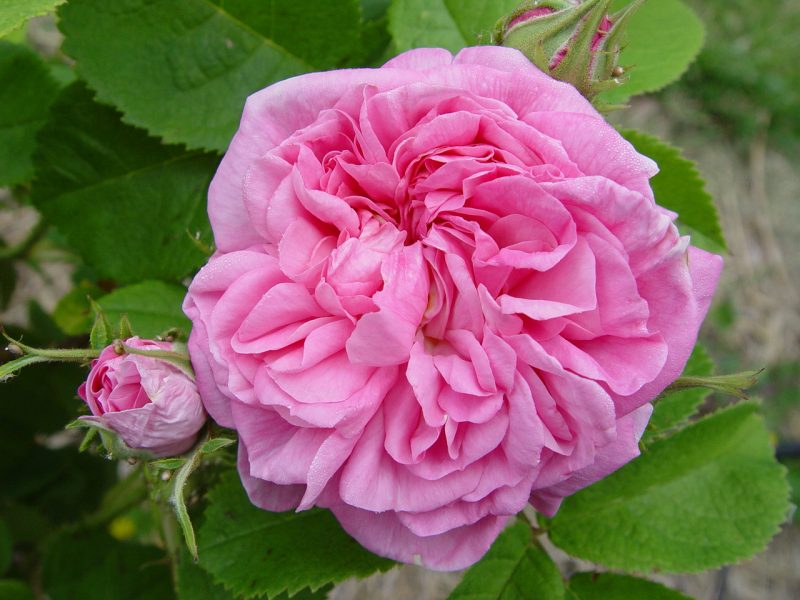 According to available evidence, Damask rose has a long history, and although the 30-million-year fossils of it have been found in America, it is originated in the Middle East and Iran. At the beginning of the 17th century, Iranian Damask rose was carried to India, North Africa, Turkey and Bulgaria and its planting expanded. Iran is one of the most ancient producers of Damask rose. Background of Damask rose production in Iran, dates back to 2500 years ago.   It is believed that distillation of the flowers was first done in Iran in the late 7th century AD. The method for distillation the flowers was spread to Ottoman Empire later in 14th century. Until the 16th century, Iran was the main producer of rose oil and was exporting it to other countries around the world. Muslim Arabs transferred the art of oil extraction from Iran to Europe in 10th century. The first European country which used this art was Spain.

In a study on normal and diabetic rats, the effect of methanolic extract of damask rose was compared with that of acarbose (a medicine to reduce blood sugar level which inhibits Alpha- glucosidase) and the results demonstrated that this extract reduced the level of blood sugar by inhibiting α-glucosidase activity which in turn suppressed carbohydrate absorption from the small intestine, and consequently reduced the level of blood sugar.

Damask rose can be effective in improving cardiovascular function. It was shown that its aqueous extract could increase the heart rate and contractility in isolated guinea pig heart. Recently, a new compound called Cyanidine-3-o-beta eas extracted from buds of Damask rose which can prevent Angiotensin1 (ACE) converting enzymes. Since ACE is a key enzyme in changing Angiotensin1 to Angiotensin2 (retractor of veins which cause an increase in blood pressure), Damask rose can be effective in improving heart function.

R. damascena can boost the mood. According to the results of a study conducted in 2011, consuming low doses of this plant’s extract reduced depression in mice with an effect similar to that of imipramine (an anti-depressant drug). Researchers believe that Damask rose can have a positive impact on mood by inhibiting serotonin reuptake.

Results of an experiment conducted in 2014 showed the aphrodisiac impact of R. damascena on patients with MDD major depressive disorder. This may be due to the effect of its oil compounds on serotonin this substance increases eroticism-reuptake inhibitors (SSRIs). In addition, damask rose oil can help improve reproductive function through increasing the number of sperms and testosterone production.

R. damascena ethanolic and aqueous extract reduced the number of coughs in citric acid- induced coughs in guinea pigs in a study conducted in 2003. In another experiment, ethanolic extract and essential oil of this plant had a relaxant effect, similar to the effect of theophylline expander of respiratory tract, on tracheal smooth muscles of guinea pigs contracted by methacholine. The exact mechanism of reducing the number of coughs following damask rose consumption is not known yet; however, some researchers believe this can be due to the stimulatory effect of this plant on β-adrenergic( participating in expanding veins and straight muscles) receptors.

The positive effect of damask rose on seizure attacks in patients with epilepsy was observed in a study in 2015. The hydro alcoholic extract of this plant significantly reduced the number and intensity of seizure attacks by inhibiting the production of dark neurons in different parts of hippocampus. This effect could be attributed to geraniol and eugenol both of which have antiepileptic activity.

As it was observed in an experiment the aqueous and ethanolic extracts of R. damascena in doses of 500 and 1000 mg/kg, with an effect similar to that of diazepam, increased the sleeping time in mice significantly. Scientists attribute this effect to the activity of GABAergic system. Also damask rose flavonoid content affects the body through central benzodiazepine receptors. Gabargic system activity is also mentioned as the other mechanism for this feature.

The consumption of aqueous and ethanolic extract of R. damascena can reduce the viability and proliferation of human gastric cancer cells. Researchers believe that the anti-cancer effect of this plant can be due to some phenolic compounds like quercetin and Kaempferol which have antioxidant feature and affect the intracellular and lateral massaging systems.

In traditional medicine, Damask rose is used to treat chest and abdominal pains, indigestion, cough, depression, nervous stress, allergy, headache and migraine. This plant is also anti-spasm and laxative, and can strengthen the heart.