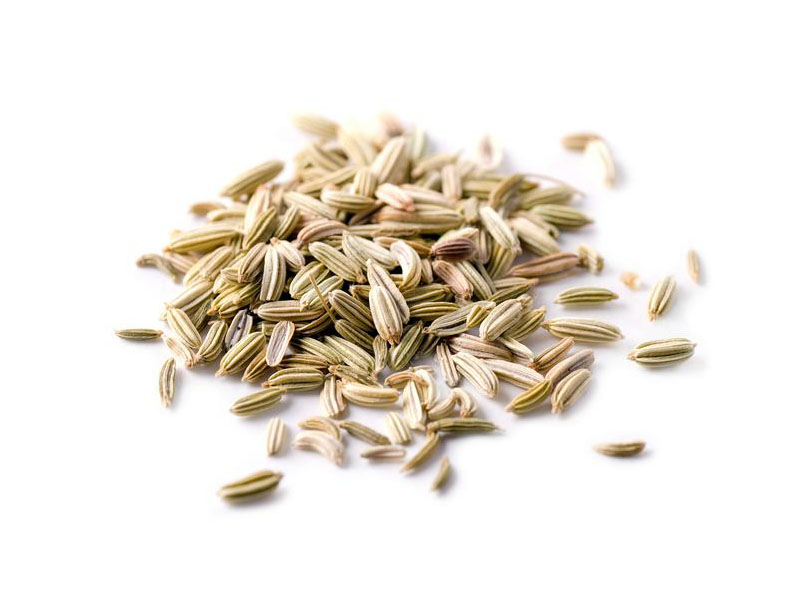 Fennel consumption dates back to the ancient times, being used in the Mediterranean region since then. Roman fighters used fennel to increase their power. This plant has been used to control weight gain. Its Greek name “marathon” meaning “staying slim” expresses people’s belief about the effect of fennel on appetite decrement. The Marathon Plain means the Fennel Plain. After the war, the Greeks have used woolen stems of the fennel as a sign of victory.

In a study published in the Journal of Clinical Nutrition Research, researchers have explored the effect of fennel on appetite decrement. The results of this study have shown that drinking fennel tea reduces hunger and increases satiation in the over-weighted women. Trans-Anethole, a compound in fennel oil, affects appetite control. It has a similar structure to catecholamine (a hormone specimen) and its effect on appetite control is similar to amphetamine (an appetite suppressant).

Fennel volatile oil has a positive effect on the digestive system. It can help to relieve gastrointestinal tract muscles and help reduce bloating. Anethole, fenchone and Estragole have such anti-spasmodic and anti-inflammatory properties that calm the intestinal muscles and prevent bloating. It is observed that fennel tea has a good therapeutic effect on IBS. It is also effective in baby colic treatment. A study published in Journal of Alternative Therapies in Health and Medicine (2003) demonstrated that feeding babies suffering from baby colic with fennel seed oil cut its symptoms.

A study published in the Global Journal of Environmental Science and Technology has investigated the effect of Chlorpyrifos (CPF) on liver and fennel seed oil on eliminating this toxicity in male rats. The liver-poisoned and healthy rats were given the oil essence for 28 days. The results have shown that using CPF leads to lipid peroxidation increment, changing the number of some biomarkers including aminotransferase (ALT), Acid phosphatase (ACP), Cholinesterase (ChE) and Gamma-Glutamyl Transferase (GGT) towards the normal value. This beneficial effect of fennel may be due to its antioxidant activity. The protective effect of this plant on the liver is due to di-limonene and beta-myrcene. In addition, di-limonene provides a protective effect against cancerous liver cells.

In a study published in BMC Complementary and Alternative Medicine Journal, the fennel extract reduced the mouse anxiety. According to researchers, fennel extract is effective in the treatment of estrogen deficiency disorders. Estrogens are hormones that play an important role in anxiety and act through GABA neurotransmitters. Fennel extract exerts its anti-inflammatory effect through the GABAergic system and estrogen receptors.

Some fennel compounds, such as phenylpropanoid derivatives, have antibacterial properties. Dillapiole is the active antibacterial component in the fennel stem. Scopoletin, a derivative of Coumarin, is extracted from fennel and has an antimicrobial effect. Fennel essence also has anti-fungal compounds. It has been shown that these compounds provide a complete inhibitory effect on Aspergillus and Fusarium fungus.

In 2006, an investigation was conducted to assess the potential of fennel as a memory enhancer and cholinesterase inhibitor in mice. Using the methanolic extract of fennel improved the memory deficits due to aging after eight days. Another study on the effects of fennel on memory performance in rats showed that fennel extract had an inhibitory effect on acetyl cholinesterase. According to researchers, fennel may be used as a treatment to cognitive impairments such as dementia and Alzheimer.

A bronchodilator effect could be seen in guinea pigs using ethanolic extract and fennel essence. The effect of fennel on opening potassium channels may be the reason to relieve the Trachealis muscle in guinea pigs. Also, the structural similarity of fennel anethole to Norepinephrine, epinephrine and dopamine may be another reason for this effect.

Researchers found that fennel increases serum levels of prolactin (the essential hormone for breastfeeding) in breastfeeding mothers significantly. According to a research published in the Iranian Journal of Obstetrics and Gynecology. Milk production begins with combining this hormone with the receptors of the milk-producing cells. In mothers who took capsules containing fennel powder, increased levels of prolactin was observed. In another article in Shiraz E-Medical Journal, researchers attribute the milk increment effect of fennel to estrogenic and phytosterogenic properties of anethole and its polymers such as di-anethole and photo-anethole. Due to the structural similarity of Phytoestrogens to estrogens, they can attach to alpha and beta estrogen receptors and receive estrogenic properties.

Researchers of Shahid Beheshti University have reported the positive effect of fennel essence on reducing the severity of dysmenorrhea in young girls. Based on the results of other studies, fennel can reduce the frequency and severity of uterine contractions. Due to the fact that prostaglandin causes muscle flattening of the uterus and causing colic pain, utilizing a spasmolytic drug is effective on pain decrement. This possible mechanism of fennel may be related to its spasmolytic nature. The anethole of fennel is structurally similar to dopamine and therefore attaches to dopamine receptors and alleviates the severity of pain. The effect of fennel in alleviating menstrual pain is like Mefenamic acid.

In an experiment, the effect of fennel on Dysmenorrhea was investigated and its results were published in the International Journal of Gynecology & Obstetrics. Thirty patients were divided into three groups: Control Group, Mefenamic Acid Receptors (every 6h, 250mg Oral) and Receptors of Fennel Essence (every four hours, 25 drops, Oral). The results showed that both fennel and mefenamic acid were effective in reducing pain compared to the control group, but the effects of mefenamic acid started earlier. However, a case of increased menstruation was reported in this test. As a result of this study, fennel can be used as an effective and safe herbal medicine for primary dysmenorrhea, although its effect may be less than mefenamic acid.

The fennel provides estrogenic, anti-inflammatory and antioxidant effects. Researchers of the University of Kharazmi, Tehran, found that fennel may be effective in treatment of the patients with polycystic ovary syndrome by increasing the serum concentration of follicular stimulatory hormones in mice. Many researchers attribute the effect of fennel on female sex hormones to its anethole and believe that the anethole polymers (such as di-anethole and foto-anethole) are phytoestrogens. The important point is the fact that men should not over-consume the fennel as it may increase estrogen and thus reduce spermatogenesis and reproductive activity in them.

The Macedonian Journal of Medical Science published a study in evaluating the effects of essential oils of fennel on blood glucose reduction. In this study, rats got diabetic with Streptozotocin and their physiological changes were investigated. Then, they were fed by essential oils of fennel and their diabetic physiological traits were again evaluated. It was observed that streptozotocin caused poisoning of beta cells in the pancreas and increased the amount of active oxygen species by inducing some metabolic processes. It also prevented the activity of free radicals destroying enzymes. This test showed that the effect of diabetes on the pancreas of rats was eliminated with fennel oil consumption, which is an effect of fennel due to its antioxidant properties. In diabetic rats using fennel oil, cell regeneration was observed in Pancreas Islets of Langerhans. So, the repair of this tissue is due to the consumption of fennel due to the restorative effect of extracellular pancreatic cells, which shows the positive effect of this substance on insulin production.

According to a research published in the American Journal of Food Technology, the consumption of fennel extract with a decrease in bad cholesterol and increase in good cholesterol levels improved blood lipid profiles in rats. Researchers attribute the decrement of cholesterol absorption or inhibition of bile acids into the small intestine to the physico-chemical properties of fennel.

Nitrite and nitrate play a major role in maintaining the function of the arteries. Fennel seeds contain high levels of nitrate and nitrite, and in the experiment, its extract increased the nitric oxide production in-vitro. It has also been observed that the methanolic extract of fennel has anti-atherogenic properties and reduces the amount of fat in the blood plasma. In this experiment, fennel reduced the level of triglycerides in the fatty liver and, by decreasing the accumulation of fat in the vessels, facilitated the blood flow in the coronary arteries. The results show that fennel can be effective in controlling cardiovascular disorders due to its effects on cholesterol decrement and anti-ergogenic properties. This plant also has a beneficial effect on heart rate improvement by affecting the blood pressure regulation.