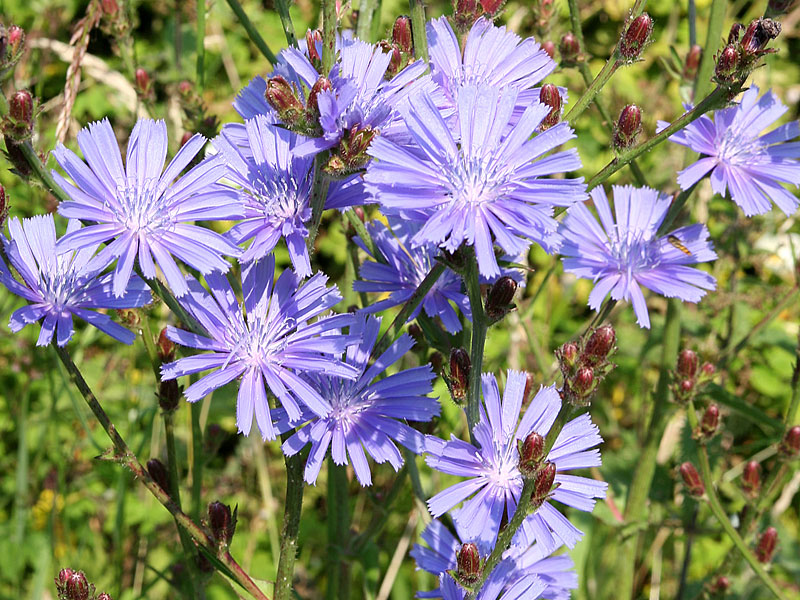 Chicory is a perennial plant that its origins are Europe, India and Egypt. As a weed it grows in mild climates and is widely cultivated in northern Europe. 5000 years ago Egyptians grew it as a medicinal plant. Chicory was taken from Europe to North America in the 1700s. The word of chicory “chicoree” is a French word that it is written (chicory) in English. Also, probably it is derived from Egyptian word “Cichorium”. Greeks and ancient Romans used chicory as a vegetable and in a variety of salads. In the early 17th century chicory was cultivated as a feed for animals in northern Europe.

Traditionally chicory has been used to treat arthritis and studies have shown that chicory has significant anti-inflammatory properties and for this reason it is used to reduce pain in conditions like osteoarthritis. In a study that was done in 2010, 70% of participants in experiment who undertreated with chicory reported a significant improvement in level of pain related to osteoarthritis. Also chicory can be used as total anti-inflammatory factor to types of pain, muscle aches and joint pain due to inflammation.

Inulin in chicory plays the role of a natural fiber. Fiber helps intestinal movement, improves the gastric motility (peristaltic) of the intestine and increases the secretion of gastric acid which generally improves digestion and greatly reduces constipation.

The extract of chicory root is mostly used as a diuretic factor. Continuous and healthy urination can help to remove toxins that the body stores in the liver and kidneys and prevent the development of dangerous diseases caused by accumulation of toxins in the body. Also, repeated urine can remove additional water in the body and even reduce fat, since 4% of urine is usually a fat sediment that otherwise can be stored elsewhere in the body.

Chicory is rich in inulin fiber polysaccharide. Inulin is a soluble dietary fiber that is resistant to digestive enzymes. This ingredient reaches the colon without alternation and fermented by bacteria. Lactobacilli and bifid-o bacteria break down the inulin and feed on it. Inulin has been evaluated and approved by the US food and drug administration (FDA).

In a clinical trial on patients with liver cirrhosis, Liv-52 drug lowered serum levels of hepatic enzymes, alanine aminotransferase and aspartate aminotransferase. Liv-52 has a liver protection function and stops progression cirrhosis and prevents more injuries to liver. Chicory is one of key ingredients in formulation of this drug. In the studies of liver anti toxicity activity of alcoholic extract of seeds and aqueous extracts of chicory root was evaluated. Oral use of these extracts in albumin rats led to a significant reduces in levels of liver enzymes. Also, the test on liver tissue did not show any accumulation of fat or necrosis after treatment with these extracts. The results of this study were published in journal of Phytomedicine in 2005.

Based on the traditional use of chicory in the treatment of diabetes mellitus, blood glucose level lowering and lipid lowering properties of ethanolic extract of chicory were evaluated. Diabetes was induced in male rats by intra-trait administration streptozotocin (used to induce laboratory diabetes in an animal model). Ethanol extract at the dose of 125 mg/kg of body weight significantly reduced serum glucose level in oral glucose tolerance test (OGTT). Also significant reduction in levels of triglyceride and serum cholesterol level in rats treated with extract was observed. The results of this study were published in Journal of Ethno pharmacology in 2007.

In a study anti-inflammatory effect of chicory extract on enzyme activity of cyclooxygenase (COX) was studied and its results were published in Biochemical and Biophysical Research Communications in 2005. The inflammatory activity of the cyclooxygenase enzyme that created by alpha- induced tumor necrosis factor (TNF-a) was inhibited by the use of chicory root extract in human colon cancer cells (HT29 cell line). The extract of ethyl acetate of chicory root inhibited the production of prostaglandin E2 (a quasi-hormonal combination to regulate inflammation in the body) in a dose- dependent method.

Pain killer properties of lactucin and its derivatives including lacto copricen and beta 11, dihydro lactocin, ingredients that are creators of bitter taste in chicory were tested in mice. For this purpose two behavioral tests of pain assessment were used (hot plate and tail- flick). In hot plate method all of three ingredients had pain killer effect that lacto copricen had the most powerful effect. In tail- flick method the effects of anti noses patio (an analgesic effect by blocking pain- sensitive neurons cells) of all of three ingredients (dose of 30 mg/kg) were comparable with the effect of ibuprofen (dose of 60 mg/kg). The results of this study were published in Journal of Ethno pharmacology.

Aqueous extract of chicory inhibited rapid allergic reactions caused by mast cells. This extract limited anaphylactic shock (shock- induced allergy) in dose- dependent method in mice. Also after treating chicory extract the levels of plasma histamine and the level of histamine released from peritoneal mast cells which are the indicators of allergic reaction were significantly reduced in rats.

Antibacterial activity of rich extract in chicory organic acid against oral pathogenic bacteria was examined.  Organic acids as oxalic acid, succinic acid, quinic acid and shikimic acid reduced formation of biofilm (one of the bacterial methods to survive in different environment) and adhesion of bacteria to cells. Of course the level of effect of each one was different.

Chicory contains a number of beneficial ingredients that make it a strong immune booster. Chicory has antibacterial effects on a number of dangerous bacterial species. Poly phenolic ingredients in chicory have beneficial effect on immune system. Also phytochemical ingredients in chicory have antioxidant function that reduces the risk of a number of diseases such as heart disease and cancer. According to the study chicory leaves extract showed a moderate activity against Salmonella typhi (S. typhi), a multi- drug resistant bacterium.

In traditional medicine of Turkey, chicory was used to treat gastric ulcer. In 2002, a study with this goal was performed and its results were published in Journal of Ethno pharmacology. Aqueous extract from chicory root brewed 15 minutes before inducing stomach ulcers with ethanol and orally fed to rats. More than 95% of stomach ulcer inhibition in group consuming chicory extract was observed.

Aerial parts, chicory flowers and roots are used to treat diarrhea, strengthen the prostate and other reproductive organs, remove bile ducts, sinus problems and treat malaria. In India it is used  to treat jaundice, liver enlargement, gout and rheumatism and in Iran it has traditionally been used to treat jaundice, Herpes simplex, very low blood pressure, increased appetite or digestion, body cleaning and as a tonic and laxative. In Italy chicory leaves have been used to clean the blood, high blood pressure, improve digestion and antispasmodic. In Jordan for all occasions such as internal bleeding all parts of the plant are used.