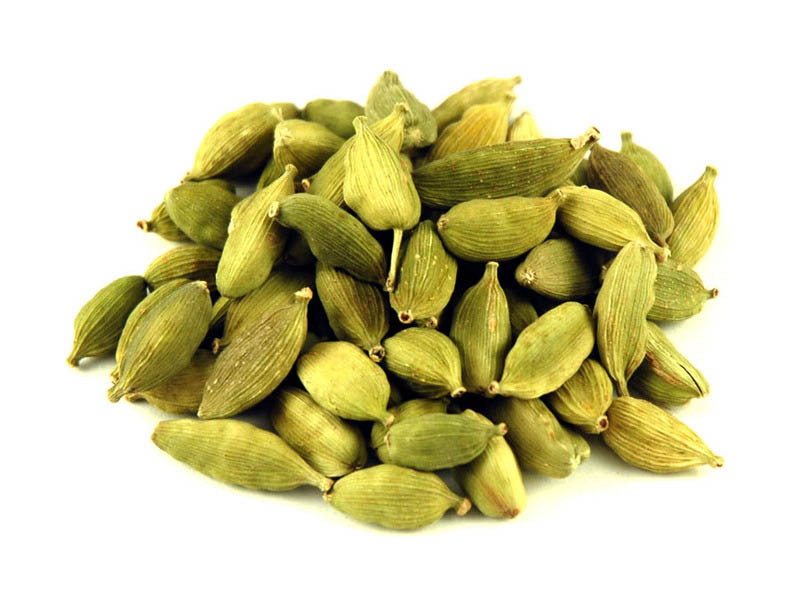 Cardamom is from ginger family and is a native of south of India. Indian spices dating back to the beginning of human civilization and in ancient Indian writings it is pointed out to cardamom. This spice has had nutritional and medicinal benefits since ancient times and Assyrian and Babylonia were familiar with its properties. This product is still one of the most valuable spices in the world and it is widely cultivated and used in East Asia. The main consumers of cardamom in the world are the Middle East countries (in the preparation of tea and coffee) and the Scandinavian countries (to improve the taste of cooked products).

The oil gained from cardamom is so useful for digestive system, has laxative effect and prevents nausea and bloating. It also prevents acidification of the stomach and heartburn. In a research that its results were published in Indian Journal Traditional Knowledge with induction of aspirin and ethanol in rats created ulcers and the extract of cardamom significantly prevents from creating it. Researchers believe the reason for this effect is due to the ingredients in the cardamom which can reduce gastric movements, because change in movements of stomach can play a role in production and prevention of gastric ulcer. It was also concluded that the extract of cardamom inhibits the hyper production of some metabolism products of arachidonic acid (these types of products have a key role in createing ulcer).

Cineol is an ingredient of cardamom that its effects were investigated on cardiovascular. In the experiments this material reduces aorta pressure average that researchers recognize this effect is related more to vasodilatation. In a research that its findings were published in International Journal of Molecular Science, the effect of cardamom on induced changes of hemodynamic (in connection with blood flow in tissues and organs) and biochemical due to isoproterenol in Albino mice was investigated and observed that cardamom can eliminate bad effects of isoproterenol.In this experiment isoproterenol reduced the antioxidants of super oxide dismutase and catalase and increased lipid(fat) peroxidation, but all of these negative effects were neutralized with the use of cardamom. According to researchers, cardamom can delay the myocardial infarction (heart attack) in patients at the risk for heart ischemia (the disease is due to a decrease in pumping blood to the heart muscle which often occurs as a result of clogged coronary arteries occlusion).

Based on findings of a research published in journal of Endocrine and Metabolism of Iran, consumption of cardamom supplement reduced waist size and as a result reduced abdominal obesity in people with pre-diabetes. Reports have shown that flavonoids reduced fat absorption by prevention of lipase pancreas activity. Flavonoids can directly affect the active site of the enzyme or indirectly increase the particles size of the lipid thereby reducing the access of these substances to enzyme. One of the possible reasons for the effects of flavonoids on obesity can be their effect on increasing the level of enzyme of carnitine palmitoyltransferase-1 (which plays a role in the decomposition of fats) and reducing the gene expression of enzymes involved in the synthesis of fats.

Researchers in an experiment investigated the effect of cardamom on liver initially developed liver intoxication with paracetamol in the liver of Albino mice and then investigated the effect of methanol extract of cardamom on this intoxication. The results of this research that were published in International Journal of Pharmacy Sciences showed the extract of methanol of cardamom prevents induced liver intoxication due to paracetamol. For evaluation of liver function they measured the levels of alanine amino transferase (ALT), aspartate amino transferase (AST), alkaline phosphatase (ALP) and total bilirubin (TBIL). Use of paracetamol increased the levels of ALT, AST, ALP and TBIL in serum; however, when animals received the methanol extract before feeding by paracetamol, it can prevent increasing these ingredients due to paracetamol .These effects can be due to inhibition of cytochrome 450 p (a group of proteins that play a role in substances oxidation). In another research that its results were published in journal of medical science of Mazandaran University, researchers also achieved similar result. Flavonoids ingredients in this plant (include quercetin) with increasing capacity of antioxidant enzymes (glutathione, glutathione reductase, glutathione peroxidase and catalase) can prevent glutathione emptying in cells. Also quercetin protects lymphocytes from damages caused by chemical and toxic materials and with collecting free radicals prevents damage to the genome and creating mutation in it.

There are different ingredients in cardamom that have antioxidant property and can increase glutathione level that is a natural antioxidant in blood. Flavonoids of quercetin, kaempferol and luteolin are among these. In a research the oral use of cardamom reduced MDA (one of products of lipid peroxidation) and increased glutathione (a type of antioxidant) in serum of rats.

In an experiment the consumption of cardamom prevented multiplication of colon cancer cell in Syrian mice and caused apoptosis of cells. In this research decreasing two enzymes of COX-2 (cyclooxygenase-2) and inducing nitric oxide synthase (INOS) were observed due to use of cardamom. Findings of considering cardamom effect on multiple myeloma disease (bone cancer) have shown that cardamom can prevent the life and proliferation of cancer cells of MM. Cell cycle regulation plays an important role in cell proliferation, differentiation and its death and disturbances in the regulation of this cycle can lead to dangerous tumors. Based on this research that its results were published in Pakistan Journal of Pharmaceutical Sciences, cardamom causes disturbance in life cycle of these cells. Also the results of a study that was published in Journal of Medicinal Food indicated positive effect of cardamom on animal skin with skin cancer. In this research the oral use of cardamom powder reduced the number of tumors.

Based on reported experiences the consumption of cardamom tincture improves halitosis. Cineol that is one of the main ingredients of cardamom has antibacterial and sterilization properties and it is used for treatment and prevention of noisome breath and gum diseases. This substance can eliminate oral pestiferous bacteria that cause bad smell in mouth and oral infections.

Cardamom traditionally is warm and dry. It is known as menstruation creator, urine creator and hypnotic and is used to treat gout and liver problems. Cardamom seed is useful to remove cough, cold, fever, bloat, vomit, and headache and reduce epilepsy attacks. If your sweat smells bad or your mouth doesn’t smell good, brew 6g cardamom with its husk as a tea and drink it several times a day. Cardamom is also strengthening for heart and nerves but its over-consumption increases palpitation and is harmful for intestinal and lung diseases.