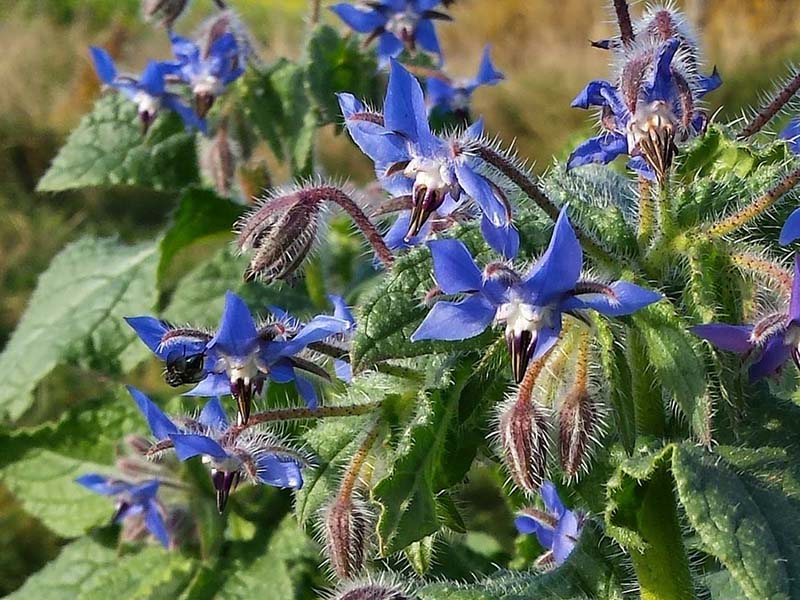 Borage with the scientific name of Echium amoenum is native to some parts of north of Iran and the Caucasus. This plant is found in many parts of Europe, West Asia and North America and is often seen wildly (the plant that grows by itself without cultivating its seed) besides the rivers. In the early nineteenth century, young parts of the plant like its foliage were used as salad or cooked. Old botanists sometimes called this plant Bugloss. According to some documentation Borago, the Latin name of borage is a distortion of the word corago (cor means heart and ago means the past). This name was due to effect of this plant on the human heart. However, John Steve Henslow (1861-1796) a British botanist believed that this word derives from barrach, a word from the ancient Irish language (Celtic) meaning a brave man.

In a study, 35 patients with mild to moderate major depressive disorder were examined. These patients randomly received placebo or 375 mg of aqueous extract of borage. They were examined within six weeks and the results indicated that in the final weeks, borage extract was superior to placebo; of course this difference was significant in the fourth week and was close to being significant at the sixth week. Extract of borage did not cause side effects more than placebo in any weeks. Also a clinical trial with the aim of evaluating the efficacy of aqueous borage extract in the treatment of patients with obsessive-compulsive disorder (33 patients) has shown that this extract can be an effective and safe drug for the treatment of these patients; although more studies are needed to confirm it. The aqueous extract of the borage probably has an effect on the serotonergic system which may reduce the nervous system discomfort.

In a research, 10 groups of male rats were fed brewed borage in order 100,200 and 400 and 600 mg/kg for 6 days, meanwhile the control group received water. Then the heart beat rate was measured by noninvasive method before and after phenylephrine injection through the animal`s tail. Consumption of borage associated with dried lime reduced basis heart beat rate and heart beat rate after phenylephrine injection. The greatest effect was related to dried lime and borage extracts at a dose of 100 mg/kg and there was a significant difference between the brewed plants group and control group for basis heartbeat.

In a research, anticonvulsant effect of methanolic extract of Iranian borage was investigated on seizure caused by picrotoxin in Syrian mice. Animals were pre-treated by inside traits injection of different doses of the extract of this plant and after 20 minutes they were injected with picrotoxin, then the level of effect of extract on the changing start time of seizure attacks, duration of seizures and death time due to picrotoxin ,was measured and compared in volunteer and control (witness) groups. Phytochemical studies have shown the presence of flavonoids in this plant and it has been proved that these ingredients can be traced to benzodiazepine receipts by binding them. In this study the results have shown that methanolic extract of borage has anticonvulsants effects on Syrian mice. The extract of this plant significantly delayed the start time of seizure compared to control group that just received picrotoxin.

A research published in Lorestan University of medical sciences quarterly journal, investigated borage effect on improvement (recovery) and recurrence of Atopic Dermatitis (a chronic skin disease). This study was performed to compare the effects of corticosteroid and borage extract on the recovery and recurrence of lesions in children with atopic dermatitis. In this clinical trial, two groups of 25 patients (children to 12 years old) with atopic dermatitis randomly were selected and were alternate prescribed topical corticosteroid with borage extract. The findings of this study, 20 days after the start of treatment, indicated that the rate of recovery in response to consumption of borage extract was 72% good, 4% moderate and 24% weak while with the use of corticosteroid, the recovery rate was 24% good, 12% moderate and 64% weak. Skin lesions did not recur after the use of extract and up to 10 days after stopping its use .However, after using topical corticosteroid 64% had a moderate recurrence and 36% had a low recurrence. According to the results of this study, due to the higher rate of recovery and lower rate of recurrence of the disease with borage extract in comparison with the use of corticosteroid drug can be used to treat skin dermatitis.

The research has been published in British Journal of Nutrition in 2009, based on results of this study consumption of extract or oil of borage reduced women`s inflammation and skin redness. Based on this study skin disorders caused by the imbalance of fatty acids are treated with this plant which also helps to treat acne vulgaris, eczema and psoriasis.

Another research on patients with arthritis has shown that consumption of borage reduced morning symptoms of this disease such as dryness and joints pain. Studies have shown that borage extract after getting into the body changes to a substance named di homo gamma linoleic acid (DGLA). This ingredient helps to reduce inflammation in body by inhibition leukotriene synthesis.

A study with the aim of determining the effect of consumption of brewed borage on urine and blood biochemistry in non-dialysis patients with renal failure was done. In this clinical trial a group of 25 mature patients with CRF (chronic renal failure) were randomly selected and was prescribed brewed borage twice a day for one week. Relative healing and preventing of severity of chronic renal failure were determined by increasing glomerular filtration rate (GFR). The use of brewed borage twice a day for one week indicated that GFR of patients significantly increases. Other indicators of recovery and control of GRF progression are reducing blood pressure level and weight of patients, as the accumulation of fluids in the body increases these two parameters. In this study after consumption of borage significantly reducing in blood pressure level and weight of patients was observed. Based on the results of this study, urinary creatinine, sodium and phosphorus excretion of patients increased which was a good indication of the effect of the use of this plant. Based on the safe nature of the plant and the effect of oral use on improving some of the kidney function criteria such as increasing GFR, the use of its brewed can be recommended for patients with mild to advanced renal failure. Based on the other research from Ingram et al. on laboratory mice in Ontario Canadian, after 7-days oral use of oil of borage seed inflammation and glomerular injuries and sclerosis reduced.

After investigating the effect of hydro alcoholic extract of borage plant on improving blood glucose disease, a research has been published in journal of medical science of Pars. In this study effect of borage was investigated on 30 diabetic male rats as injection of inside traits extract for 30 days. Level of insulin at under treatment animals with 600 mg/kg of borage extract showed a significant increase in comparison to diabetic group and activity of superoxide dismutase enzyme also increased in receiver groups of doses of 400 and 600 mg/kg than diabetic group. This study proved that Persian borage extract has a decreasing effect on blood glucose level and can prevent diabetic weight loss. Also levels of triglyceride, total cholesterol level and LDL in all groups were reduced as dose-dependent; this reduction was significant in doses of 400 and 600 mg/kg of extract compared to diabetic control group. These effects are probably due to the presence of ingredients such as flavonoids, saponins and its antioxidant properties.

Researches show that borage plant has antioxidant and anti-mutagenic properties that fight cancer cells growth. Laboratory studies have shown that the extract of this plant increases activity of cytotoxic cells (cytotoxic cells significantly reduce the life of cancer cells and toxic cells). Supplements of borage protect cell DNA and naturally reduce oxidative injuries that cause inflammation and disease.

Iranian borage has many effective compounds such as tannin, mucilage, phenolic compounds, sugars, ‎flavonoid and a small amount of alkaloid. This plant contains mucilage (3-5%), flavonoid (0.15%) and ‎anthocyanin (13.43%) with delphidin and cyaniding aglycones. Also this plant contains insignificant ‎amount of pyrrolizidine alkaloid. ‎

The medicinal properties of borage have been identified by the Romans since the beginning of the third century BC and introduced to Europe. Many years ago, they soaked the leaves of this plant and used it as a valuable drink for relaxing and fixing nervous problems. John Gerrard, a botanist of sixteenth century believed that borage would make people happy and lively. Pliny Dalder, a Roman philosopher believed that this plant is anti-depressant and makes people brave. John Evelyn, an English author of seventeenth century writes: “borage prevents illness and laziness and has a warm and dry nature, chewing its fresh leaves traditionally is useful to treat septic rashes of mouth and its brewed is helpful for shortness of breath. This plant eliminates depression, reduces blood pressure, funny, dilutes blood, eliminates anxiety and distress (presentiment) and eliminates cardiac palpitations. It is a hypnotic plant, diaphoretic and vasodilator, also it is anti-swollen and soda, fever and cough and is effective for bloating.