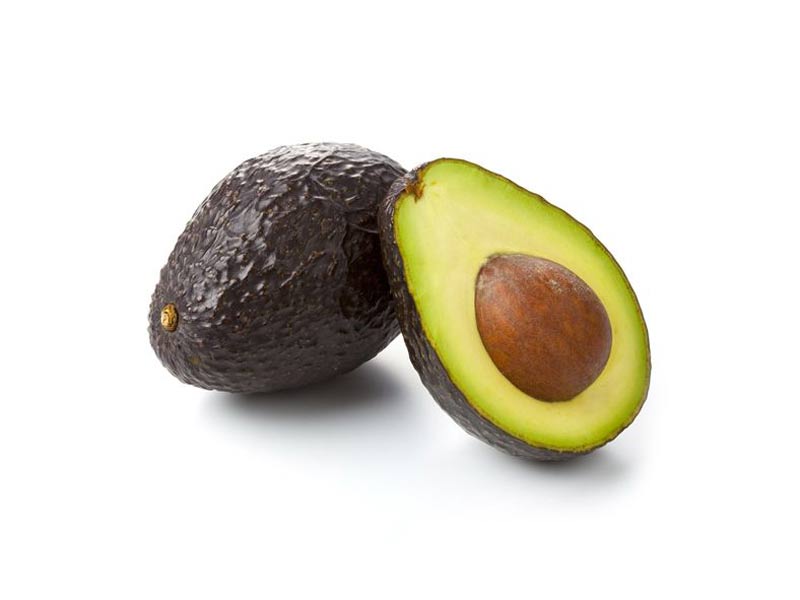 Avocado has been a part of the Mexican diet for many years. Archaeologists have found signs of consumption of avocado in Mexico which is about ten thousand years. At that time human collected the wild avocado and consumed it. The researchers believe that avocado cultivation began around 5000 years ago. Tribes like Mayans cultivated avocado trees. In 1833 a botanist named Henry Prine for the first time cultivated avocado in Florida. But its commercial cultivation did not begin until the early twentieth century. At that time while avocado was very popular in California, Florida and Hawaii people in other states avoided its consumption. Until the 1950s the plant was limited by its use in salads. Avocado is also called “pear crocodile”.

Avocado has the highest lipophilic antioxidant capacity among fruits and vegetables. The main carotenoids of avocado are Xanthophylls which are fat soluble antioxidants. Xanthophylls reduce the level of oxidized LDL (bio marker of vessels injury) in blood. A study in the United States on atherosclerosis revealed that if the plasma Xanthophylls would be higher, the progression of the vascular wall thickness will be lower. This showed the protective effect of these ingredients against atherosclerosis. In avocado the level of lutein Xanthophylls and Cryptoxanthin is much higher than the other carotenes. The beneficial effect of phenolic ingredients on the reduction of oxidative stress and inflammation, improvement of blood flow, endothelium health, inhibition of platelet aggregation and consequent reduction of cardiovascular diseases in researches have been observed.

In a random study a group of women consumed a diet rich in unsaturated fatty acids with a double bond that included a high amount of avocado. After three weeks it was observed that the avocado diet reduced total cholesterol and LDL level. The researchers concluded that the diet rich in avocado can improve serum lipid profile. The other study on patients with type-2 diabetes showed that by combining dietary carbohydrates with unsaturated fatty acids with a double bond (that avocado is one of their main sources), lipid profile and glycemic index have improved.

In another study, researchers with evaluating the effect of avocado on the amount of blood lipid in patients with dyslipidemia (disorder in level of lipids serum) observed an improvement in blood lipid levels. In this study that lasted for 4 weeks, consumption of avocado reduced total cholesterol and LDL level and increased HDL. The main mechanism of the effect of unsaturated fatty acids with a double bond on reduction of triglyceride is not known, but researchers have recommended two mechanisms: the first, changes in VLDL ingredient; and the second, changes in enzymes activity and proteins involved in VLDL catabolism that both reduce blood triglyceride density.

Perhaps avocado is known as a high fat fruit but no research has shown its effect on weight gain. The reason can be the effect of this fruit on creating the feeling of satiety. Because avocado has high fat in comparison with manyother fruits many consumers consider it as fattening and remove it from “limited energy” diets. But in a research that was done in nutrition institute at university of Potchefstroom to consider avocado effect in diet of “limited energy” on weight loss and blood lipid in obese people and overweight opposite belief was observed.

In this experiment 55 volunteers (11 men and 44 women) with body mass index 27 kg/m2 to 44 were divided into two groups. Experimental group daily received 220 g of avocado for 6 weeks that it was 30 g of fat substitute and control group removed avocado from their “limited energy” diet. Findings showed significant reduction in body weight, body mass index and the percentage of body fat in both groups and it was concluded that replacing 30 g of dietary fat with 200 g of avocado a day in a “limited energy” diet did not have a negative effect on weight loss. The results of another research in which 26 healthy people with overweight took part showed that consumption of half of avocado at lunch time significantly reduced hunger and tendency to eating and increased feeling satiety. In addition, other experiments have shown that a diet rich in these fatty acids protects body against abdominal fat accumulation.

In 2013 an experiment to investigate avocado effect on liver injury caused by CCL4 in rats was done and its results were published in journal of World Applied Science. In this experiment the avocado phenolic ingredients were found to be Ferulic, salicylic, synergic, P-Coumaric and Cinnamic acid and flavonoids are Quercetin, Luteolin, Rutin and Kaempferol. These phenolic ingredients and flavonoids significantly reduced densities of AST (aspartate transaminase), ALP (alkaline phosphatase), ALT (alanine transaminase), total bilirubin and Malondialdehyde and significantly increased activity of enzymes of SOD (superoxide dismutase), GPX (glutathione peroxide) and CAT (catalase) than control group. Therefore, we can recognize the mechanism of avocado effect on improvement of liver function as related to its protective antioxidant mechanisms (phenolic ingredients and flavonoids).

In a research that was done in 2016 and its results were published in Journal of Pharmacy and Pharmacology, the effect of avocado extract on TSH, T3 and T4 in treated rats with CCL4 was investigated. In rats treated with CCL4 the level of TSH was increased while the levels of T3 and T4 were reduced in comparing with control group. Based on these results the consumption of avocado extract improved the level of these ingredients. Avocado contains selenium, zinc, copper, iron, antioxidant, vitamins of A, C, D, E, K and B that play a role in improvement of thyroid function. Selenium changes T4 (thyroxine) to T3 (triiodothyronine) and keeps thyroid hormones in the blood and tissues of the body including the liver and thyroid gland to the optimum level. Zinc supplement can compensate for hypothyroidism and copper that are required to produce T4. Iron-rich foods (like avocado) can compensate for iron deficiency anemia that can be associated with hypothyroidism. Selenium and vitamins A, C and E are important antioxidants that neutralize stress oxidative in thyroid gland. Vitamins of B group are essential for thyroid function because they play a role to create T4.

In 2017 an experiment to consider avocado effect on cognitive function was done and its results were published in journal of Nutrients. This randomized controlled trial lasted six months and based on observations during 6 months avocado reduced level of serum lutein by 25% and improved spatial and work memory. Researchers concluded that consumption of avocado that is a natural source of lutein can be an effective strategy to improve cognitive function.

Recommended mechanism of beneficial effect of lutein on cognitive function in elderly people is its antioxidant or anti-inflammatory property. The other recommended mechanisms for lutein effect in nervous tissue include modification of the functional characteristics of synaptic membranes along with certain changes in the physicochemical and structural characteristics of these membranes. Although the level of lutein in avocado is relatively low, the same level has a great effect on increasing blood serum lutein. Daily use of avocado increases serum lutein.

Lutein and xanthine are selectively absorbed into the macular tissue of the eye (a part of the eye where the light focuses on the lens). The absorption of relative amounts of lutein and xanthine decreases with age and its value in women is lower than that of men. Studies have shown that low levels of lutein absorption and lack of its amount in plasma can cause the severity of eye malfunction related to eye aging process. Results have shown that unsaturated fatty acid diets with a double bond protect the eyes from aging- induced malfunction. The effect of avocado on the health of the eye can be attributed to the fact that this fruit contains a combination of these fatty acids and lutein carotenoids and xanthine and helps to absorb carotenoids from other fruits and vegetables. The body`s access to lutein and xanthine of avocado is so greater than its availability in these ingredients in vegetables and other fruits.

Avocado has anticancer properties due to having Carotenoids, Terpenoids, Phenols and Glutathione. Now information on avocado anticancer activity is based on in-vitro tests and human cancer cell lines. Most of these studies are done on cancer of the larynx, throat and mouth.

Based on the findings of national institute of cancer researches in United States, the level of glutathione of avocado is multiple than its level in the other fruits. Glutathione acts as an antioxidant. Although the body analyzes this substance into its amino acids, there is a great deal of association between increasing glutathione absorption and reducing the risk of oral and throat cancer. In a study it was observed that xanthophyll and lutein reduced biomarkers of bio tension in patients with early stages of cancer of the larynx, throat or mouth. Xanthophyll- avocado rich extracts have Anti-Helicobacter activity that can be associated with the effect of this fruit on reducing the risk of gastric cancer. Investigation on prostate cancer cell lines also revealed the antitumor effects of avocado extract. Due to the high level of lutein in avocado and the anti-tumor characteristics of this carotenoid, lutein of this fruit is thought to be responsible for its anti-cancer effect. On the other hand, as in one experiment lutein alone did not have this effect it is mentioned that carotenoid, vitamins and other ingredients of the extract may be effective in preventing the growth of prostate cancer cells. Recent studies have shown that phytochemicals extracted from avocado fruit contribute to the proliferation of human lymphocytes cells and reduce the chromosomal abnormalities associated with the use of cyclophosphamide drug. Cyclophosphamide is used to treat various types of blood cancers but it also has genetic toxicity. Therefore, the use of a protective factor along with cyclophosphamide is essential. Studies have shown that avocado fruit phytochemicals selectively inhibit cell cycle, inhibit growth and induce apoptosis in cancer cell lines. In an experiment the effect of methanol extract of avocado fruit on genetic toxicity caused by cyclophosphamide was investigated and it has been observed that the extract of this fruit completely neutralizes abnormalities caused by cyclophosphamide. This can be due to antioxidant activity of phytochemicals of avocado fruit.

Avocado has been used in traditional medicine of many countries from many years ago. Native Americans used its seed to treat diarrhea. Based on traditional medicine of China avocado has a cold nature. This fruit regulates liver work and accurate function of lung and intestine. Its pulp is used to treat wounds. Its brewed seeds are used as mouthwash and it is used to treat tooth pain. Brewed seeds, branch and leaves are used to improve menstruation. Avocado is used to enhance stomach and also is used to eliminate tiredness, anemia and insomnia.